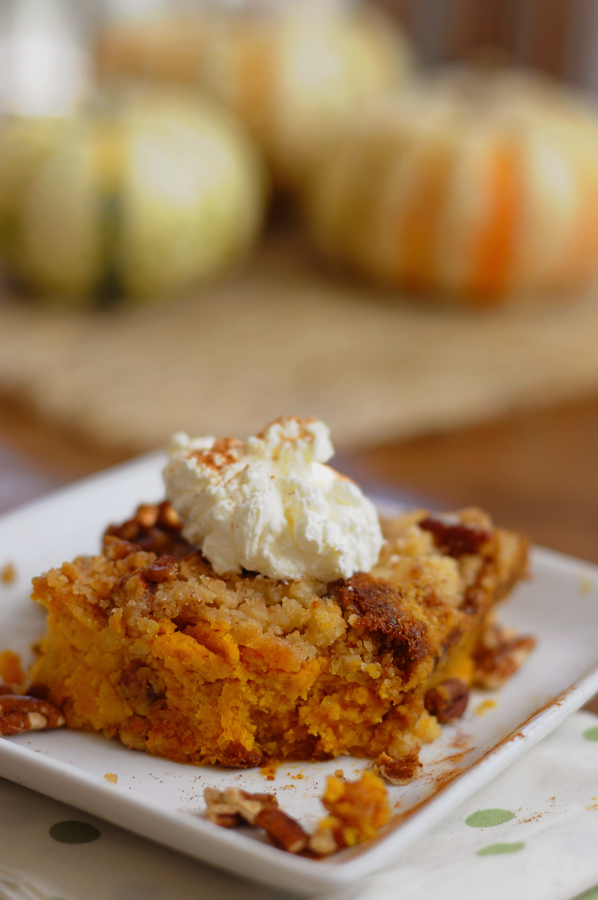 For many years, we had always hosted the neighborhood Halloween Party.  On the night of Halloween, everyone showed up in costume attire to chow down on big vats of homemade chili, corn muffins, and slaw or large trays of baked ziti, Caesar salad, garlic balls, and some sort of festive cocktail. It really depended upon my mood and how many were expected to show up. One year, a friend of mine brought over a huge tray with a pumpkin like cake on it. I couldn’t figure out what it was. A layer of pumpkin like mousse atop some sort of crust over a sprinkling of pecans.

I took one bite and I was addicted.  I can’t really call it a cake, even though it is made with a cake mix. It is kind of like a pie, but not really. Her mom called it “Pumpkin Delight” and I have to say, it is delightful. For years, I followed the recipe.  Would never have thought to have changed it. But with me being conscious about what I put in the food that I make, thus what ultimately goes into my kids bodies, I decided to test this recipe using more whole ingredients.

I swapped out many of the original ingredients.  Instead of evaporated milk(which has a host of perservatives), I used organic, heavy whipping cream, rather than white sugar I used coconut sugar, and instead of margarine, I used whole, organic butter. I went on line and looked at the ingrdeients in a typical, boxed cake mix.  and I made my own “yellow cake mix” using pantry staples.  It took a few batches before getting the result that I wanted. The end result was just as good, if not better than the original.

It’s not the “prettiest” of desserts, but I have taken this to many parties and although I couldn’t take credit for it in the past, this new adapted version feels more like my own.