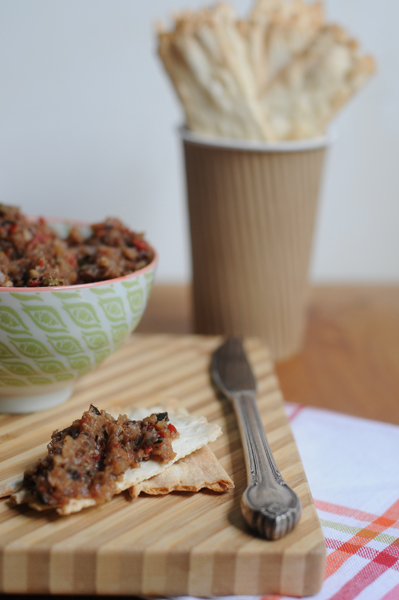 Summer is around the corner and our bar-b-que is cleaned and ready to roll. I love summer grilling. Not just the food and the luscious flavors that come off the grill, but the whole idea of being outside. The bikes get used more, the art supplies emerge from the garage, and the use of “screens” becomes almost non-existent(the key word here is, “almost”).

When I read my friend Marla’s post about an event that she and our friend, Dara, were planning, that centered around grilling, I knew I had to participate.  Each week, there is a different theme from appetizers to kebabs, vegetarian to desserts and since I am already outside firing up the grill, why not bar-b-que with a community?

Last weekend I had returned from the farmers market with enough produce to feed my entire neighborhood.  As the red, green, purple, yellow, and orange vegetables stared me in the face, I instantly knew what I wanted to do.  I grabbed the eggplant, zucchini, purple onion, orange pepper, and a few tomatoes, sliced them and rubbed them with a bit of olive oil and red wine vinegar.  Tossed them in a bowl with Celtic sea salt and some fresh ground pepper.

The grilled ratatouille was eaten, outside, as the rest of the meal was cooking on the grill.  The kids took a few bites, shot a few baskets, then came back for more.  I believe summer has arrived!

instructions:
• spray your grill grates with cooking spray. preheat grill.
• toss the eggplant, zucchini, bell pepper, and red onion with a bit of olive oil and red wine vinegar.  sprinkle with celtic sea salt and fresh ground pepper.
• place veggies on hot grill. while veggies are cooking, toss tomato in the same olive oil/vinegar mixture. set aside.
• veggies will cook from 4-8 minutes, depending upon the vegetable.  just keep an eye on it.
• remove cooked vegetables from the grill and let them cool slightly.
• place tomatoes on the grill for about 1 minute per side.  not too long as you don’t want them to fall apart, you just want them slightly seared. remove and place them on the plate with the vegetables.
• in the bowl of a Cuisinart , fitted with the metal blade rough chop all the vegetables.  you want it somewhat chunky.
• add the kalamata olives and the capers.  pulse 4-5 times.
• remove mixture and place in a large serving bowl.  add the juice of one lemon and the chopped basil. stir to combine.  taste for seasonings.
• keep refridgerated.  makes a great spread on sandwiches and we like it on our eggs!